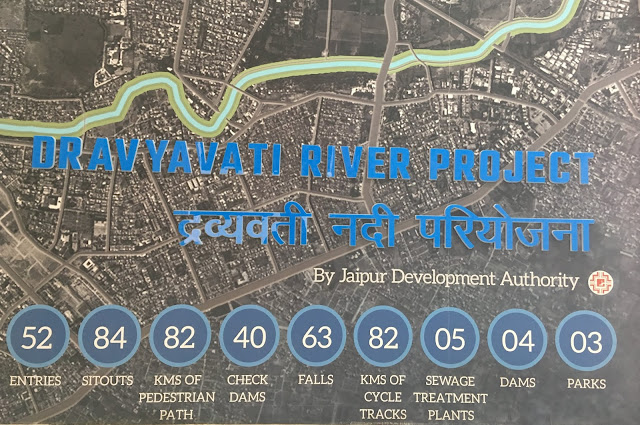 What Is Dravyavati River Rejuvenation Project?

Dravyavati River Rehuvenation Project is the glory of Jaipur. It was once a thriving river which turned into a drain (Amanishah Naalah). This rejuvenation project is based on the concept of watershed rehabilitation, flood prevention, pollution treatment and recovering the lost ecology of the river. The project involves course correction, sewage interception and treatment and value creation, all of which will help restore the historic river of the city and nurture a harmonious relationship between the citizens and nature.

“A good plan today is better than a perfect plan tomorrow.”

Evolution of the river

Historically the river served as an important source of water for the city. The 20th century saw its deterioration due to over extraction, failure of rainfall, siltation, together with exponential urbanization of the city which added untreated wastes and encroachments on its floodplains. The presence of industries on its banks which disposed untreated chemical wastes and industrial solid waste proved a bane for the once self-cleansing river.

The urban pattern is a theory of aesthetics about how the build and un-build character of city development has evolved over time. Consider not just the streets/ roads / circulation but the scale of blocks and the division of land within each one and you get the abstracted pattern depicted on grand wall, a patchy city as an artist would draw.
As a ‘BINDI’ accentuate beauty of the face of an INDIAN women, Jaipur is gifted with a new trinket to flaunt, the sheer beauty of the cities physical form is enhanced by the organic flow of the Dravyavati River. Here we take our grandest dreams and set them in concrete for our generations to come.
Experience the beauty of Jaipur’s new Jewel.

Dedicated to the residents of Jaipur, the project aims to mitigate the flooding hazard of the river which passes through the heart of the city. Another objective is to improve health and sanitation by proper collection and treatment of waste water thus converting a drain into a perennial river. The design and development of riverfront and parks also enhances living in the city.
Jaipur development authority, where town planning is a tradition, was established with a mission of planned, holistic and inclusive development of Jaipur, a fast emerging metropolitan city. JDA undertook the challenging task to rejuvenate the Dravyavati River, to improve the housing, health, sanitation and overall standard of living of the people of Jaipur.

Who are working for completing this project?

Tata Projects Ltd. (TPL) And Shanghai Urban Construction Group (SUCG) came together in a joint venture to undertake the ambitious Dravyavati Project. TPL is a fast growing and reputed infrastructure Development Company while SUCG have experience in similar river rejuvenation projects in China. The consortium leveraged technology, advanced construction methods and well-orchestrated collaboration between diverse specialists to ensure flawless and on time execution. Jaipur Development Authority has given a contract to a consortium of Tata Projects and Shanghai Urban Construction Group at a project cost of Rs. 1,676 crore to complete the Dravyavati River Project. The consortium will be responsible for the maintenance of this project for 10 years from its completion.

What things are covered in this Dravyavati River Rejuvenation Project?

Creation of a vibrant and lively riverfront by development of attractive destinations and wide promenades with a dedicated cycle lane. The river front has been made more appealing with the use of interesting elements like green seating spaces, public facilities and visual patterns without affecting engineered hydraulics. Safety and security is ensured in the city section of the riverfront with state of the art surveillance.

This park sit upon the remnants of the Ram Sagar Dam constructed in 1846, thus it has a thriving ecology of its own. We have preserved and enhanced the wetland and the natural habitat of the migratory and domestic birds thronging here. A colonial era waterworks and the breached dam wall are other interesting features which have been conserved as the heritage Waterworks Museum- a first in India.

The entire riverfront has a green cover of a wide variety of native seasonal trees and native grass species all along the length of 41 kilometers of the river from Mazar Dam to the confluence with Dhund River. The plantation varies with the context which is a unique feature of the riverfront. These greens will not only provide visual relief and buffer to the users but also affect the micro climate of the adjoining area. The riverfront is open at Shipra Path.

The botanical garden is located on the junction of the Tonk Road and the Dravyavati River. It is designed on the theme of the five senses of sight, smell, taste, hearings and touch while imparting knowledge about the plants and their uses. There are a total of sixteen spaces earmarked for different types of gardens showcasing over a 40,000 plants of 1000 different species.

There are four dams along the Dravyavati River: Mazar Dam, Sikar Road Dam, Gullar Dam and Ramchandrapura Dam. Each Dam was cleaned and restored to its original condition, removing water hyacinth and Silt accumulated over decades. They act as buffers in the case of flooding and recharge the underground water. The irrigation water for agriculture will also be of better quality. In time, the treated clean water from the STPs will make these dams attractive water bodies ideal for picnics and water sports.

Nodes are destinations to be created by the riverfront where the main roads of the city intersect with the river thus enhancing the accessibility; both motorized and on foot. There are a total of seven nodes proposed at Mazar Dam, Sikar Road, Ajmer Road, New Aatish Market, B2 Bypass, Sanganer and Tonk Road. Provision for recreational, vending spaces and parking shall be made on all the nodes.

There are fifteen plazas planned as minor destinations, local landmarks along the length of the riverfront. These places are access points with parking, vending spaces, sitting areas and public convenience.

Visually long and wide walkways on both the sides of the river has been designed between the river on one side and the grass slopes and tree line embankment on the other, which are well connected with all the intersecting transit channels. These walkway designs vary between the river crossings.

82 Kilometers of color coded cycle lane have been developed as the part of the project to provide a public facility to the entire city. These cycle tracks continue under all the high level bridges.

There are a total of 106 sitouts spaces out along the entire riverfront on both sides including the plazas and nodes. The sitouts are located at a distance from the entrance to the decongest them and enhance the experience of the visitors. Keeping in mind the climate of the city an attempt has been made to provide shape to all the sitouts by making provision of evergreen trees.

There are many gated entrances at the nodes and plazas and all the road crossings. To the access controlled riverfront for increased accessibility to the public space. These have been designed to stand out and be visible in regular traffic. All the entrances are barrier free and have provision for both stairs and ramps in an efficient manner. All the entrances are also cycle friendly, though all the ramps are handicapped priority.

What is the use of Sewage Treatment plants in this project?

What is a STP?

Sewage treatment plants are the locations where the process of treating wastewater, primarily from household sewage takes place. Physical, chemical and biological processes are used to remove contaminants and produce treated water that is safe for the environment. A by-product of sewage treatment is a semi-solid waste or slurry called sewage sludge. The sludge has to undergo further treatment before being suitable for disposal or application to land.

The number, sizes and locations of the STP’s were decided after studying the sewage that was entering the river and the available land space. The SBR design used has the advantage of using less land than a conventional Activated Sludge Process.

The system is operated in a batch reactor mode as this eliminates some of the inefficiencies of a continuous process. Two or more modules are provided to ensure continuous treatment. The complete process takes place in a single reactor, within which all biological treatments steps take place sequentially. It provides the highest treatment efficiency possible in a single step biological process.

How is sewage cleaned?

What are the benefits of this project?

The benefits of this project are better understandable in the image. Click Image to enlarge it. The Key benefits are as:

What are the material used in the project? Posted by By Be Curious Team 12 Min Read
Load More